Swimming In Deposits But Feeling The Heat

Managing Through Payments Adversity
← Back to Insights

Thanks to stimulus funds in consumer bank accounts and massive injections of cash into the economy by central banks, most banks have more deposits than they can lend. Banks need to ensure their deposit and card offerings are operating at peak efficiency.

SWIMMING IN DEPOSITS BUT FEELING THE HEAT

The performance of banks typically runs in parallel with that of the economy.  The last year has dramatically tested the ability to predict and anticipate consumer behaviors with no historical references to fully rely on.  The financial industry hedged its predictions and prepared for the expected losses of much greater volume than anything previously experienced.  And while some segments performed poorly, others did not.   Last summer saw a drop in COVID 19 cases and a corresponding improvement in economic performance. However, winter’s surge of infections and corresponding government-mandated shutdowns created more volatility as businesses once again fought to adjust and survive. Ironically, bank profits that were being punished during the second and third quarters rebounded nicely, with most reporting robust profits at the end of the year.  What was that about?

The trading and investment banking divisions of the largest banks did well, thanks to the booming markets.  But those wins were also seen in organizations further down the size spectrum.

Last summer’s fears of loan losses with corresponding asset write-downs and additions to reserves turned out to be too pessimistic.  Most borrowers were able to maintain loan payments, attributed to many in various sectors maintaining employment and others making good use of stimulus funds.  In response, many banks significantly reduced reserves in the fourth quarter, thus boosting profits.

But the combination of stimulus funds resting in bank accounts and huge amounts of money injected into the economy by central banks has caused deposits to mushroom astronomically. Typically, banks work hard to attract deposits as they are the cheapest source of funding, and the more they have, the more they can lend.

In the current environment, banks have far more than they can use as loan demand has shrunk to the lowest level in years.  In the U.S, loan-to-deposit ratios dropped to 56% in 2020 from 94% in 2008, forcing banks to try to push deposits away.  The perks once offered with various product sets, including tiered interest rates and attractive account pricing, have slowly been reduced as banks work to manage their deposit assets effectively and de-incentivize customers. Since last year, two of Europe’s largest lenders, Deutsche Bank and Commerzbank AG, require customers to pay a 0.5% annual rate to keep large sums of money with them. 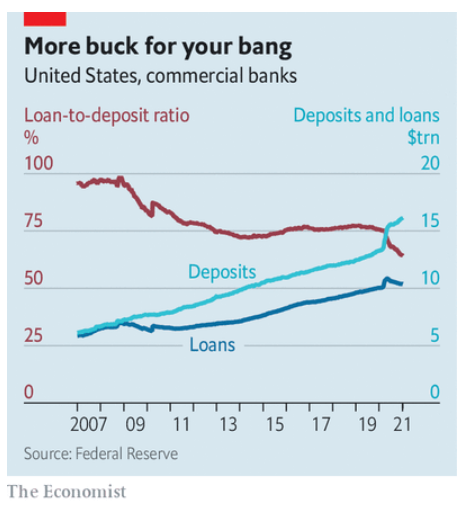 In the U.S., the Biden administration’s support for the third round of stimulus could drop another $1.9 billion into the economy, which would certainly provide even more liquidity into the system.  With banks already struggling to find ways to put their existing deposits to work by lending them out, many executives fear this saturation of cash could spur inflation.  Shifts in deposit levels have contributed to changes in spending and payment patterns in other products. These shifts have forced organizations to further evaluate their value propositions, pricing, and targeting to effectively manage and grow all product lines.

The pandemic has changed life for all of us, but it has been particularly pronounced for lenders and credit card issuers. Experian reports credit card debt dropped by 9% in 2020, from $829B to $756B, the lowest since 2017.  And consumers opened 9 million fewer credit card accounts in 2020 than in 2019. For the first time in almost 15 years, revolving debt balances have decreased, with the average consumer credit card balance decreasing by $879. Profitability is under pressure, driven by loss provisioning, reduced outstandings, changing spending habits, reduced value of rewards, and an overall poor economic environment.   Many behavioral changes among consumers may be long-term, if not permanent and require more creative thinking and different marketing and product design approaches.

At Profit Insight, we have spent the last several months helping clients think through ways to optimize their existing businesses for the turnaround sure to come.   The excess in deposits – and shortage in demand for lending assets – is putting increased pressure on margins and earnings for banks while also driving unwanted growth which may paradoxically increase their capital requirements.

Some clients have been shedding assets, branches, and staff in a push to reduce expenses and boost margin performance.  Many have also redoubled their efforts to invest in improving digital engagement capabilities and encouraging more customers to participate in those channel offerings.

While reducing expenses can improve efficiency ratios and increase performance in the short-run, banks also need to ensure their deposit and card offerings and the ancillary operations and services supporting them are functioning as planned and in the most optimal way possible.

In the pandemic environment with so many additional challenges in play, it can be especially hard to look under the hood to identify what could be working better – unless you have a business partner like Profit Insight in your corner.

As 2022 beckons, we review issues affecting banks and other payment providers that will continue to drive strategy in the new year.
END_OF_DOCUMENT_TOKEN_TO_BE_REPLACED
Managing Through Payments Adversity

The customer value proposition of credit cards has not really changed in the past 10-15 years. Addressing current challenges to
END_OF_DOCUMENT_TOKEN_TO_BE_REPLACED
Managing Through Payments Adversity

Deposit institutions work hard to attract customers and encourage existing ones to consolidate business with them. What happens when they
END_OF_DOCUMENT_TOKEN_TO_BE_REPLACED